This past weekend, we attended a very fun dance competition. 3 ladies, all of varying time in dance, areas of interests, and levels of expertise, were there from our school. Of course, each dancer wanted to win. This was not surprising. However, I found something interesting in why each one wanted to win.

Lady A, who had been dancing the longest and had won First Place titles before, said that she wasn’t really interested in “winning”, but more-so wanted to show the newly discovered profundities of dance movement that she had learned through her “DanceKinesis” training. That she had competed and won before was now irrelevant. Between then and now, she felt as though she had improved a lot, and wanted to validate it by putting it on the competition floor… not against the other dancers, but against her past. Although all aspects of the dance are important, she wanted to be adjudicated on the strengths and weaknesses of her body movement in particular.

Lady A entered the competition feeling that between the Latin and the Smooth (Foxtrots, Waltzes, Tangos (for the non-dance readers), the Latin categories would display her talents best. In the end, her wins included many freestyle heats and Firsts in both the Smooth and Latin Championship Rounds. Afterward, one of the judges remarked at how outstanding her body movement was, and asked if she had trained in Belly Dance or some related form. She replied, “No, only DanceKinesis”. With that, she had achieved her goal. She had won… not against her opponent, but against herself.

Lady B has been doing competitions for 2 years. Although she dances in some freestyle heats, her focus is Proficiency Points. She wants to be judged on technical merit (how well she applies the necessary dance techniques). This past weekend was no exception. She had been on her new training program for only about 3 months, and was a little nervous about having made such a decision so close to comp. She, and everyone in the group, was elatedly taken aback as"Lady B" was called to receive top honors as the Most Improved Dancer in Technical Merit! We were ecstatic! She had won… not by beating out her fellow competitors, but by overcoming several obstacles, and proving to herself that she actually could improve; and, by such a large margin.

HOW TO DISCOVER YOUR WINNING PSYCHOLOGY

A winning psychology has 2 primary motivators:

2. A Positive Direction for Your Desire

We all have positive and negative thoughts about ourselves. Good thoughts will lead to a positive self-image and positive self-expectancy. These two self-traits recognize and nurture strengths, goals, drives, and potentials. They are also very pragmatic and realistic, and will equally recognize faults and limitations. Ill or unpleasant thoughts will create a negative image and negative self-expectancy. This will very dangerously focus on the faults, bad habits, and other weaknesses, often causing us to retreat further into an unpleasant state.

To control these, one must understand them. We ‘objectively’ and ‘subjectively’ make up these images and expectancies. Objectively, we look at facts and not feelings; things such as our physical appearances (nationality, height, hair color, eye color) —things which we cannot change. Subjectively, things which we can change, such as personal feelings about our and/or others’ opinions, take a place in the make-ups of our images and expectations. They include; caring, loving, laughing, demeanor, etc. It is this union, or interwoven complexity that causes the ultimate problem/s.

One’s self-image / self-expectancy is often very biased because it is mostly ‘subjective’. We act more-so based upon how we feel or how we wish things were than the realities of how they really are. Then, we justify it by a psychological mental aid called the “Righteous Mind”. Often and unfortunately, we have tendencies of being critical and judgmental when things are not as we believe they should be. We focus more on flaws and faults than on more positive thoughts and attributes. One example might be of a dancer whom dances beautifully, but is so concerned with being overweight in her costume that she believes that her dancing is not good. We must remember that, almost always, one’s perception of one’s self is subjective, and thusly, biased, and is probably very different from how others see it. For example, the dancer might believe that he/she is overweight and does not look nice in the costume; while, someone else might think that they have the perfect body and weight for it, and are able to focus on how wonderfully the person is dancing.

We are often resistant to change our biased perceptions (self-images). Yet, we must realize that they change almost constantly throughout our lives as we go through changes in physical appearances, locations, stations, relationships, etc. It is more important to focus on the ‘objective’ parts of our beings, and to create well founded self-expectancies based on reality rather than disillusion. It is more important to focus on the positive aspects of our beings than on the negative ones. This sounds good, but then why do we so naturally do the opposite? Fear.

Fear is destructive, and will ‘always’ lead us in the wrong directions. When one’s motivating goal, in competition for example, is to beat someone else, this is Fear disguising itself as Desire. In actuality, this motivation is the fear “I am not as good as him/her”, or “They are better than me”. This is the psychology of a loser being tricked by the irrational rationalizing of their own negative thoughts. The Winner has a similar yet far more positive motivator… “I am not as good as I can be”, or “I need/desire to be better than I am”. These motivators are Desire… Desire which comes from Love of Self-Image and a want of Self-Expectancy. Life’s energies, both visible and invisible, are like magnets pulling us toward or pushing us away from, our truest desires. Winners know how to focus on their objective and innermost desires, goals, and directions, and because they are forever focused on the positive prevailing thought of competing against and bettering themselves for themselves, they never succumb to a hidden sponsoring thought of negativity.

re are. Winners are forever rebuilding the Now; never dwelling on the past nor planning for the future [for one is gone, and the other might not come]. Winners understand that change is inevitable and should not be resisted but embraced to be made manifest in the best interests of self-image, which will ultimately create of itself a grandly desirable self-expectancy. The 3 ladies at the competition this past weekend seemed to innately know and embrace these things; each in their own way, and to their own requisites, and it served them well. Congratulations, ladies, and thank you for proving that DanceKinesis Works.

The thoughts, responses, and questions of our readers are not only welcomed but encouraged. We love hearing from you. Come, dance with me. 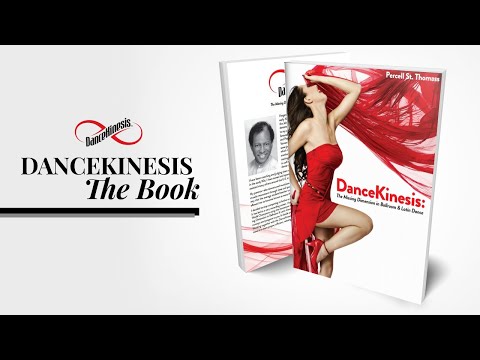